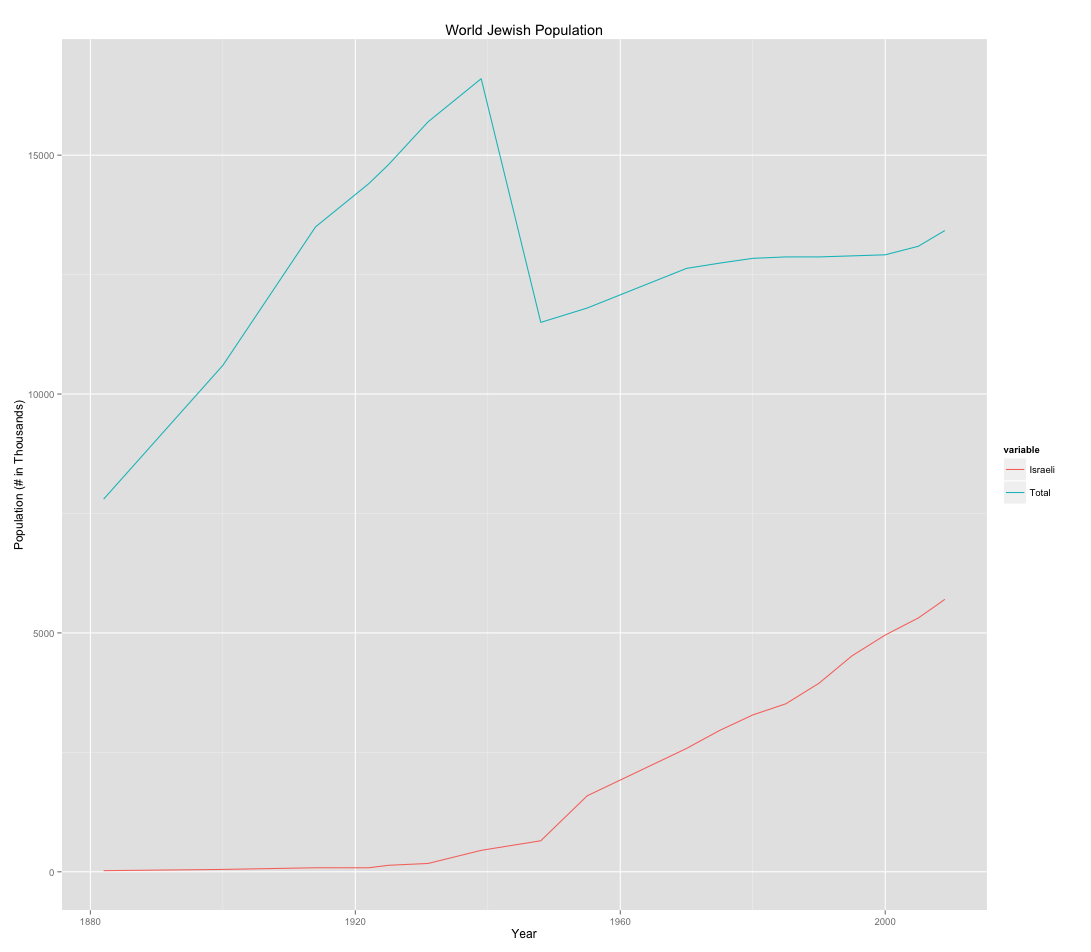 Israeli Jewish population has been increasing steadily since Independence. Number of Jews in world has remained fairly constant and increasing at a slow rate after WW2. 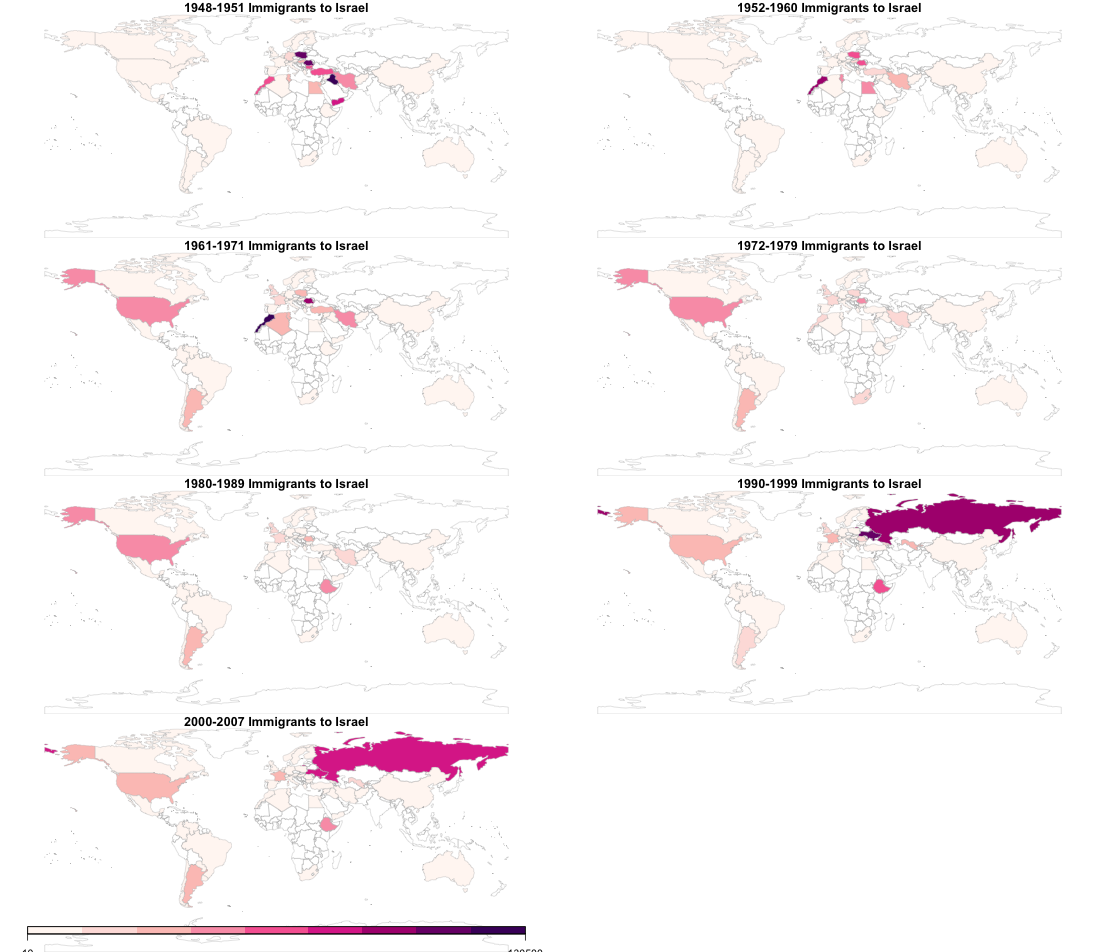 Between 1952 - 1971 most migration was from North African (Morocco and Algeria) and Eastern Europe. The only large movement of Jews from Middle East into Israel was from Egypt (I'm assuming 1956 Suez War was the cause). Itzik informed me his family move from Iraq in 1952 which was after most Jewish Iraqi's left.

The 1980's were a lull of immigration, with Ethiopian Jews beginning to come.

Finally, at the end of Cold War Former USSR (mainly Russia and Ukraine) countries allowed Jew's to emigrate to Israel. This ongoing migration contained over 1 million Jews and the dramatic increase in Israeli Population is shown below. 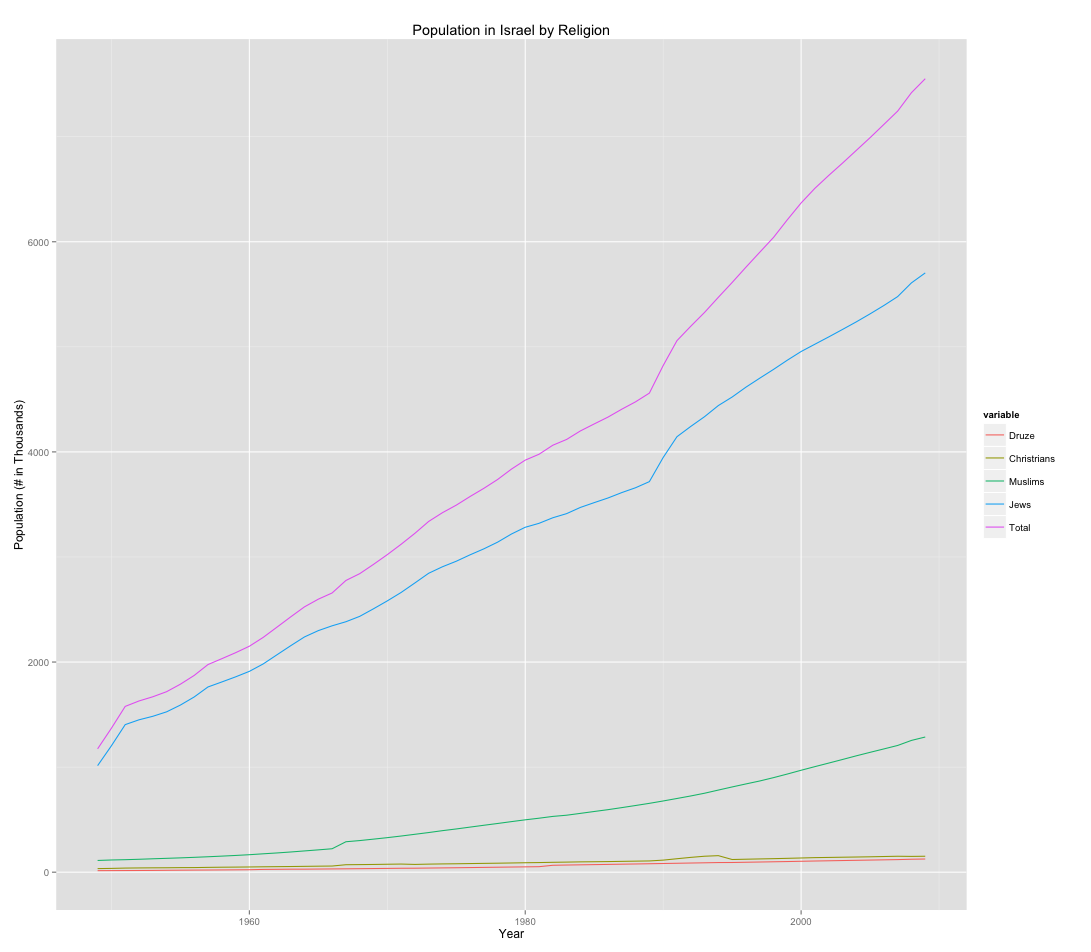 Above is population in thousands of Israel by Religion. We can clearly see the large increase in Jewish population occurring in late 1980's early 1990's from former USSR immigratns. Also, one can see a sudden increase in Muslim population in 1967 due to the annexation of East Jerusalem.

To get a better understanding of growth rates in Israel Log population values of the same data are shown below. 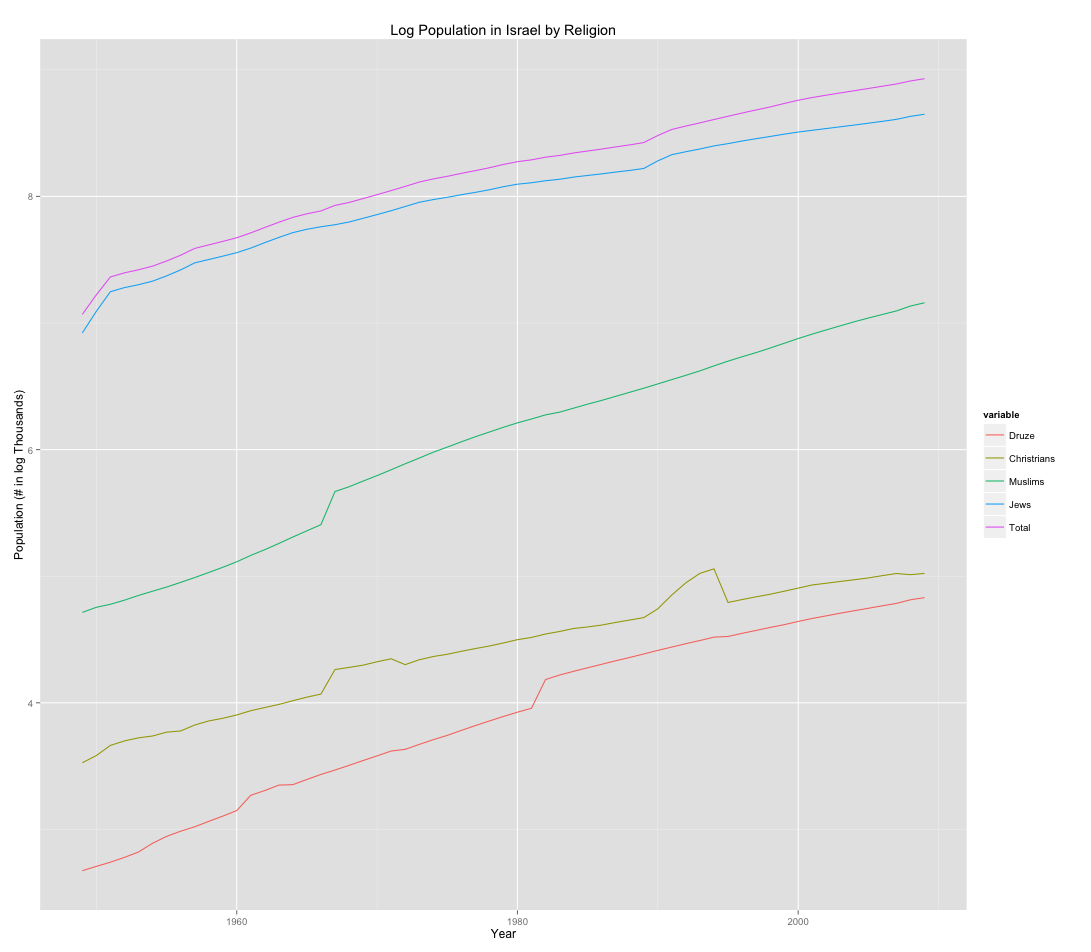 Here we can see more clearly that Muslim Population is increasing at a much faster rate than Jews or any other group.

Also note that in 1981 number of Druze went up suddenly because Israel (all but in name) annexed the Golan Heights. I'm not sure why the Christian population increased in mid 1990's and decreased... 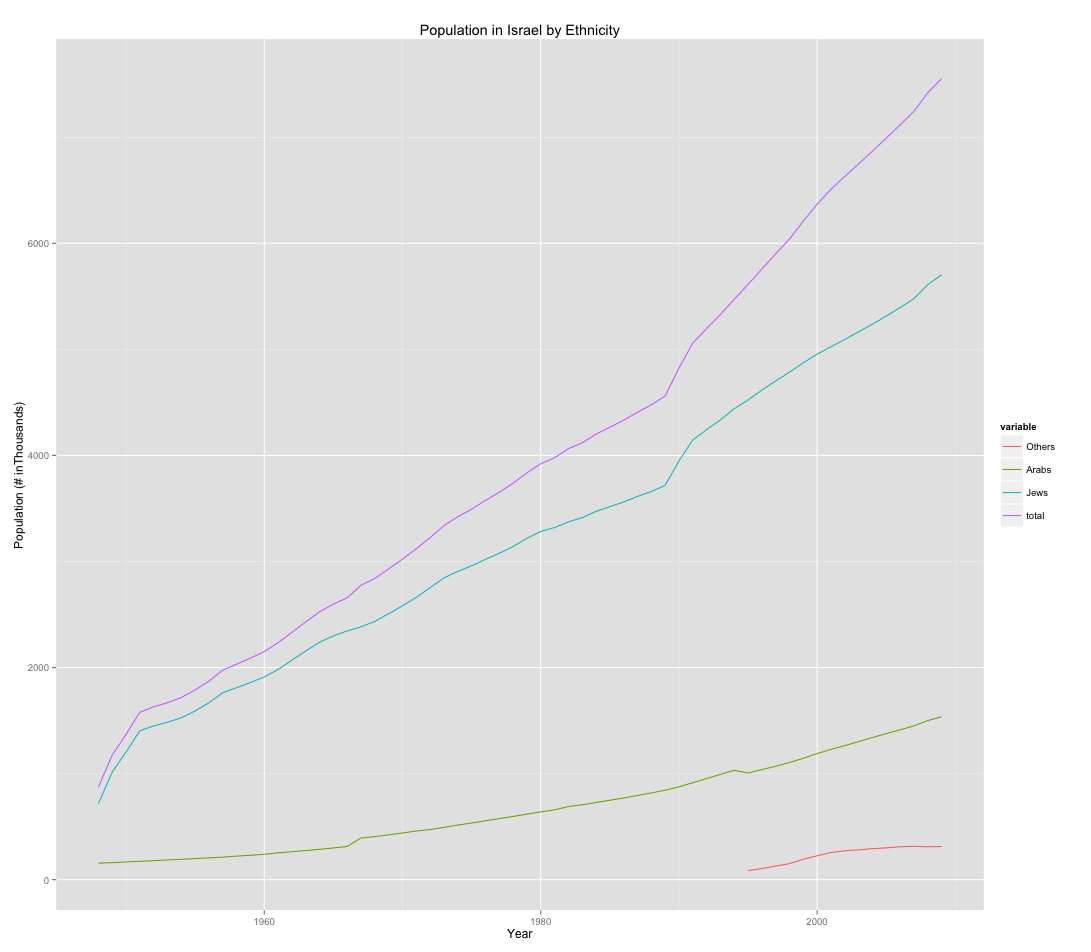 Above is Population based on Ethnicity and not Religion as before. It looks much the same except the Christian and Muslim population are shown as Arabs. 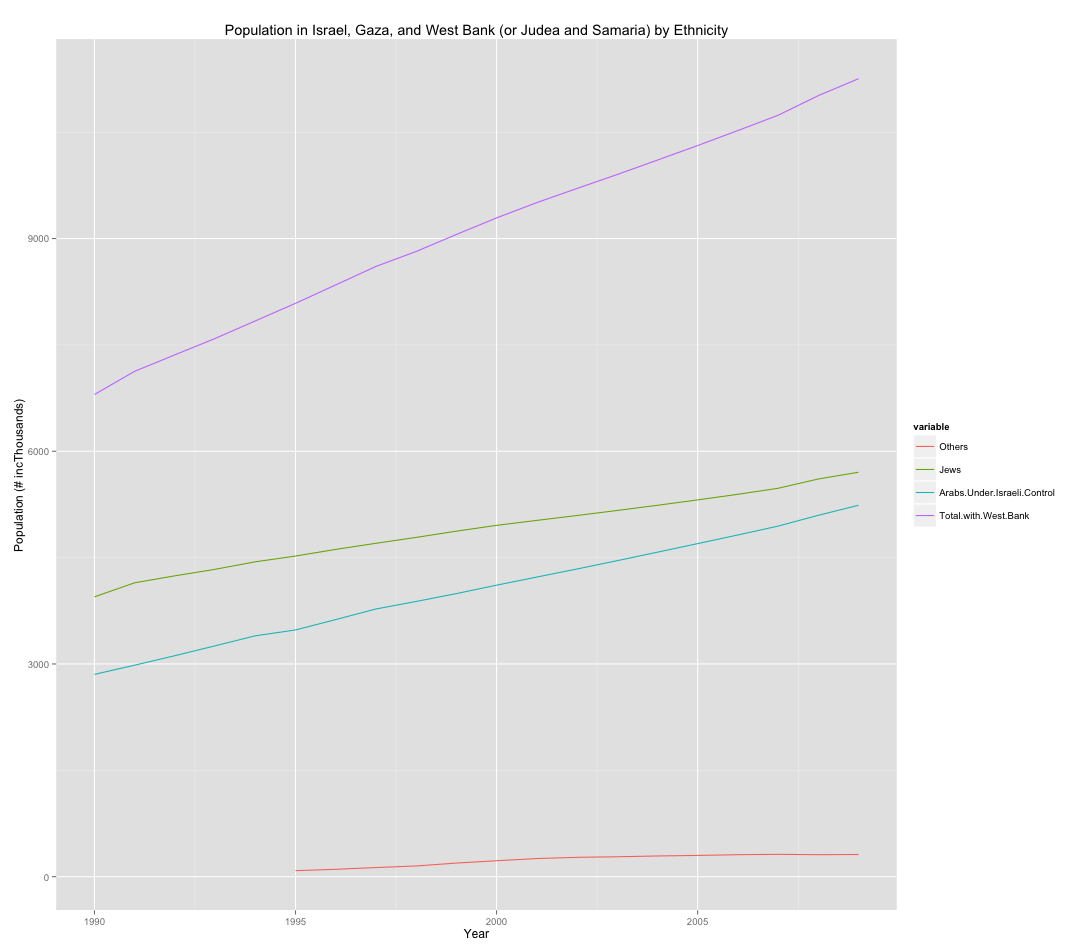 Finally, I'd like to close off by including West Bank and Gaza Population. These territories include over 4 million people. If we include them in our current data then Jews are only slightly in the majority.