A High Altitude Overview of the European Theater 1939-1945

In this post I outline the infographic I made on the European theater in World War Two using Luftwaffe plane locations found on ww2.dk. This dataset includes both information on the location and size of individual plane groups throughout the war. While clearly not encompassing everything about WW2 I think using this dataset could be an effective way of describing the war for a few reasons.

First, with the exception of the Battle of the Atlantic (which is missing from this infographic) and the last few months just about all battles of WW2 in the European theater had some nominal Luftwaffe presence. Being experts in tactical air power (the ability to fight and influence the battlefield directly) required the Luftwaffe required the planes to be located near the battlefield. Due to the range limitations of WW2 aircraft (particularly single engine fighters) the airfields needed to be very close to the front lines. Therefore, the airfields locations provide a fairly accurate representation of the front lines. Below is a plot of most airfields (I've excluded the airfields in the arctic in this plot due to size limitations) used in ww2 below. 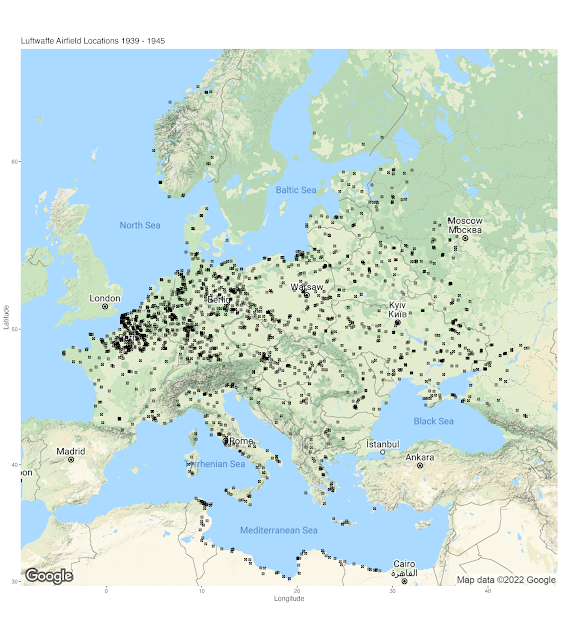 Second, while the majority of the fighting casualties were on the eastern front the majority of military expenditures were not necessarily on the eastern front. More recent research has found that the belligerents of WW2 spent a large amount on producing aircraft. Germany, for instance, spent about 48% of its output on aircraft production in July 1944 compared with only 7.8% on tanks. Similar expenditures exist among American and Great British forces.

Finally, in I think in part because planes were so expensive there’s pretty good data on them. While there were certainly more men involved in large battles they’re aggregated at a fairly high level and no month-month data exists (to my knowledge) of strengths and locations. Ships on the other hand of very good data. I think you can geolocate a ships location by the day. But there were only a handful of large scale engagements. Airplanes have both good data and large number of observations making it a “sweet spot” for data analysis.

And finally the atrocities. Most military histories treat the holocaust as a side show. Something that happened in the background, undercurrents of the main tidal waves. However, that reading kind of misses the point of what WW2 was about. It was a war of annihilation. Of racial hierarchies and where certain people were better and therefore had the moral authority to impose their will. The German atrocities are well documented. To name a few; starvation of millions of soviet prisoners, reprisal attacks against civilians, slave labor (to such an extent that it eventually amounted to 20% of its output in agriculture and industry), and human shields in combat, and dark ways to maintain law and order. All of Europe suffered. At the apex of this was the systematic murder of Jews - the holocaust.

I’ve included markers (in yellow) that determine the holocaust events. Shown are four types of events. The first is general deportations of Western Jews to ghettos, generally in Poland. The second coincides with the invasion of USSR and is knows as ‘holocaust by bullets’. This is where special german troops einstatsgruppen followed the invading army and shot Jews and other undesirables.Then there were deportations to death camps starting in early 1942 lasting until the camps were liberated in early 1945. Finally, as the Soviets were about to liberate the camps Nazis forced survivors to march to Germany. Perhaps I have bit off too much on this infographic but I think it would be remiss of me not to include it.

This history isn’t necessarily new (I follow the timeline of Strategy of Defeat by Murphy). But I have not seen this information in one infographic. Airpower was very important to the conflict. While it may not have been as decisive as its proponents expected it to be (it didn’t win the war single handedly) It’s hard to imagine WW2 unfolding the way it did without it. Could Germany have gone so far without it using it as effectively as they did? I don't think so. To a large extent the story of the European Theater between 1939-1945 is about planes and atrocities.

Below shows a gif of two charts. The top one is the map that shows the allocation of Luftwaffe Forces by Fronts. There are bar plots for Bombers, Ground Attack, Fighters, Night Fighters, and Twin-Engined Fighters (abbreviations for each one). Arrows between maps show where large scale movements of planes are going to.

The second chart shows similar information but 'flattened' out into one dimension so as we can see movements through time. I have included the large plot below that as well.

Code and data in R can be found here

Here is link if the above doesn't work

Link to image is here

Here are a couple of additional plots I made: