The Lexus LC 500 has been introduced to much acclaim by car reviewers. Of notes are the cars decent steering, optional V-8 powertrain, and handling that borders on sports car rather than grand coupe. However, is there enough of a market for the Lexus to sell it's desired 4800 cars a year?

To find out I produced a time series plot of yearly sales by probable competitors (thinking luxury coupes costing ~$100k. Of course these cars might appeal to different customers, but all can be bought by the same luxury seeking demographic (I'm think LA or Hamptons). Also included is the previous version of Lexus' luxury coupe, the SC. 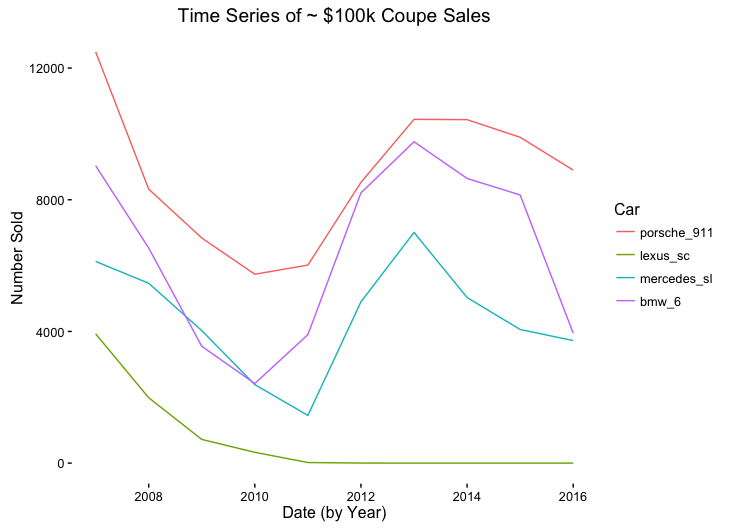 (The general trends of competitors are similar in that they appear to be correlated with the economic environment of the time.)

A dated and underwhelming car Lexus SC sold just under 4000 cars in 2007 and dropped off after that. It seems reasonable that if Lexus followed the script on a plush and luxurious coupe / convertible (think SL500 competitor) it could conceivably come up with 5000 cars a year which is approximate number of cars sold for the 3 competitors displayed, at least in its first years when its still new.

However, Lexus did not follow the script of luxurious convertible that might appeal to its standard base but created a car exciting and involving, more 911 than SL500. Would the traditional Lexus SC buy want a Lexus CS? I doubt it. The CS seems like a drivers car and the SC was not. So previous sales of SC might not be a great indicator of future sales.

More worrying for sales is that the Lexus does not have a convertible at the moment (although there is a concept). It seems hard to sell that many cars in this market without a convertible as all competitors do.

It probably won't come close it its 4800 cars a year but sales probably aren't the point of this car. It probably will bring some much needed cred into the auto enthusiast community. What this car is then, is a halo car.
Posted by sam at 6:07 PM