I previously made some network graphs of Middle East country relationships here using Slate's Middle East Friendship Chart. I was thinking of a way to visualize these relationships (and possibly other ones) with more rule based and objective measure over time. What kind of public dataset could show countries relationships accurately?

I used weapons / arms trades between nations to explore these relationships. I think arms trades are a good indicator of how friendly countries are together because 1) countries won't sell to enemies and 2) if a country wants to befriends country, buying weapons are a good way to do buy influence.

SIPRI has a very detailed dataset of international arms transfers between >257 nations / organizations in the post war era. The include a type / description and quantity for all trades. For this analysis I will use only the fact that two countries bought or sold some weapons for a particular year.

One can create adjacency matrices from this dataset and make some network plots. However, doing this one year at a time will not create have a smooth plots over time. I decided to use siamese network graphs to embed a country indicator and year variable in two dimensions with the response variable being whether or not countries traded arms in that particular year. This will transform the country and year of a country into a 2 dimensional space, and means if two points are near each other they probably traded in that particular year.

You can check out the graph here. It's cool that we can see Iran moving away from US to Russia / Soviet Union around 1979 while Egypt and Iraq move towards US.

One can also explore other relationships. Below is a graph of relationships of the world in 1960. There is a Russia/ Soviet Union cluster and a US / Western Europe Cluster. Neat! 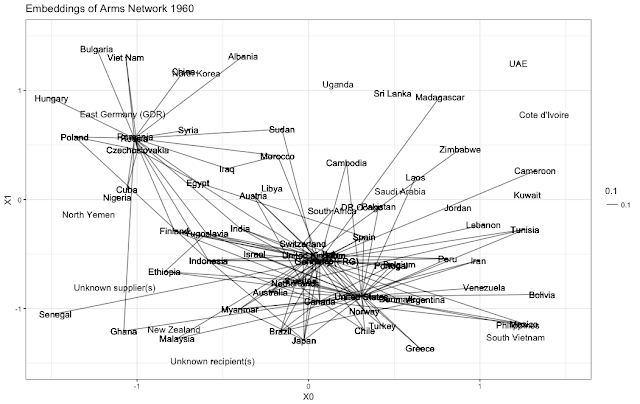 Analysis was done in python (using the Keras example for siamese network) and R (for plotting).
Posted by sam at 7:09 AM